Accessing information and publicly undisclosed files from the Canadian government requires patience, persistence and a bit of due process.

It’s not like they’ll hand over any information without reason. Once that’s established, you must be specific about the details involving that reason. The what, where, and when, are all important.

There is only one form required for an Access to Information and Privacy request. However, there are many departments that could have the information you seek. If you have the wrong department, even with all the requirements, your request will be rejected with a “no record found” as the reason.

It’s the quickest way to lose $5 outside of playing the Lotto Max.

Still, you might actually have the right department, and there may legitimately be no record of the files you request. You have no way of knowing either way.

Now imagine a scenario where we have all the required information with your request, but you still get a “no record found.”

How do you know if you can take that response seriously? Can we actually know for sure?

Well, I have a sneaking suspicion I can spot the difference, and the proof is in the mail.

To date, I have filed eleven FOIA requests. Eight of those are reports of UFOs reported by civilian pilots and the other three were on me.

Regardless of the reason for the request, all requests are mailed to and the responses are mailed from, the same building.

The three requests I made for myself was to see if I had any record or under any investigation by the DND or CSIS. As expected, all three were returned “no record found”.

The front side looks the same, with the returned stamp, and my physical address on it. For the purpose of this article, I want to focus on the backside of these three envelopes.

Because I was testing a theory. I opened these three pieces of mail by using a pair of scissors and delicately cutting one edge off the letter so that I can pull the mail out from the side. This was so I could preserve the envelope.

The delicate process of preserving mail.

Pay attention to the way this document was sealed. It looks pretty normal. Like an average letter, anyone would get from the Canadian Government.

Even the envelopes returned to me when I requested information about reported UFOs to Transport Canada had similar issues.

All opened on the side as the previous three, however, each one of these envelopes was sealed with pieces of tape.

I have been tracking these for a while, and I have spent my fair share of time on the phone with the administration at the Department of National Defence and they told me that when a request is completed, they place the documents in the envelope and seal them by hand.

It was explained to me that sometimes the glue on the flaps doesn’t always stick, so sometimes they will put a piece of tape over the flap to make sure it doesn’t open when being mailed.

This is a reasonable explanation. However, I found the coincidence to be quite weird. Three out of three of the personal requests were all sealed normally, and all eight of the UFO requests were taped.

Remember, the mail is processed and mailed from the same building. Is tape the protocol for UFOs?

I did learn that the files are not mailed directly from that level, they are sent up for processing, and then downto be mailed.

Let’s take a closer inspection of three of the eight envelopes.

The envelope above had been opened at the top before being sealed with tape. The tape was placed over the return address and postal stamp.

This envelope, a different request, was previously opened on the side of the envelope and then sealed with a piece of tape.

The envelope, had tape on the reverse flap, was not opened prior to delivery, however, my name was circled.

I first questioned the post office where I pick up my mail. It goes directly to them and is not delivered to my house. They had no explanation as to why the mail was taped or opened like that. “It is a federal offence,” one of them said.

I then called the Department of National Defence and asked the same administrator again. She explained to me again the process, the same as mentioned before. She swore that she didn’t do it (she handled the files herself), but mentioned again that the files are sent up to other offices before being sent down again.

I asked if she thought the upper levels would tamper with the mail, and she said, “I certainly hope not.”

Of course, this doesn’t really confirm the location of the activity. However, we can confirm that somewhere between the time it left her hands and ended up in mine, someone had opened it and then re-sealed it. Three times I can confirm definitively, and possibly five more times if you don’t believe the “not enough glue” explanation.

Here’s a question. I have requested eight ATIPS on reported UFOs to Transport Canada. Seven out of eight were returned, “opened” with a letter stating “No Record Found”. One, however, came with a disc containing an electronic file. That file is a redacted investigation report on a UFO. Why tamper with my mail, circle my name, then release a redacted investigation report?

I’ll touch on the redacted CIRVIS report in my next article. 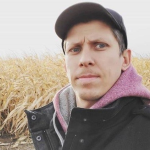 Ryan Stacey is a certified Private Investigator, the C.E.O. and Founder of Black Light Investigative and Surveillance Services and The Experiencer Support Association (TESA) – A UFO/Paranormal Research Association.

He is also the Former National Chief Investigator for MUFON CANADA.

Report your experience or sighting at: www.tesacan.org/reportingsystem

The CIA has been monitoring UAP researchers for decades

Why was the FBI made aware, of the 21 February 2021 “fast-moving” cylindrical object?

Buy us a cup of coffee

The UFO Show #02 - Little Anton, Lou Elizondo, Jack Parsons and Nazi Science
YouTube Video UC5SVVrOm77FJzIwCaDFn6mA_AdLDT7cch8k
We use cookies to ensure that we give you the best experience on our website. If you continue to use this site we will assume that you are happy with it.Ok